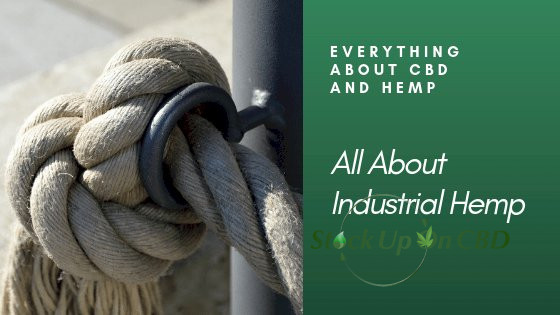 Industrial hemp derives from the Cannabis sativa L plant and is one of the toughest and most versatile plants on the planet. Hemp is different from marijuana (Cannabis indica) in looks, environment, and composition. Hemp is perfect for several different types of production. From clothing to construction, hemp delivers. It’s also a renewable resource.

A Brief History of Industrial Hemp

One of the first agricultural crops planted and harvested by human civilizations was hemp. In nearly all parts of the globe, it has been found to have been used in a number of different ways throughout history. Additionally, when the Americas were being colonized, hemp was a valuable and important part of the foundation of the United States, as it was a required crop by the government.

Subsequently, people cultivated hemp throughout the first half of the 20th century. With the Industrial Revolution, the number of hemp farms also dramatically decreased. Around World War II, hemp became synonymous with marijuana and the psychoactive effects were demonized in mainstream culture.

The confusion with cannabis shifted into high gear with the Controlled Substances Act of 1970 and the creation of the Drug Enforcement Agency. Consequently, President Nixon announced then that we were going to war with drugs.

The result was that all of cannabis was classified as a Schedule 1 drug, right there next to heroin and methamphetamine. Consequently, the plant’s beneficial qualities suffered.

The laws around cannabis are currently changing all the time and each state has different statutes on where they stand. Decriminalization is the first step to helping hemp again become the plant that can have a positive impact throughout the world.

The Uses of Industrial Hemp

Believe it or not, cannabis is much more than just an intoxicating substance. The different strains of the plant even look dramatically different.

The sativa variation is a tall, narrow-leaved, tree-like plant which used in the industrial hemp process. What differentiates these from the shorter, shrub-like plants? They contain less than 0.3% THC, the intoxicating effect in cannabis.

The list of things hemp can produce is lengthy and covers a wide spectrum.

Hemp is a multi-million dollar crop and could transform many global issues. Furthermore, hemp grows quickly. It also yields large productions. Also, it grows in climates all over the world. It’s even easy to integrate it with crop schedules.

Industrial Hemp and the Future

It appears that the cannabis plant has never been studied more in its very long history than it is being studied now. The number of medicinal benefits seems limitless with hemp. Additional studies promise even more benefits discovered.

For a plant that can possibly be the oldest on the planet, it is extremely underutilized and little is actually known about the plethora of benefits, or what else it holds. No other plant is as versatile as cannabis. Additionally, the more we learn and share, the greater the opportunities are to have a substantial impact on global issues like hunger, health, and quality of life.

How Can CBD Be Beneficial For Skin?

WHAT IS THE ENDOCANNABINOID SYSTEM AND WHY DOES IT MATTER?