Is CBD Oil Legal in All 50 States? 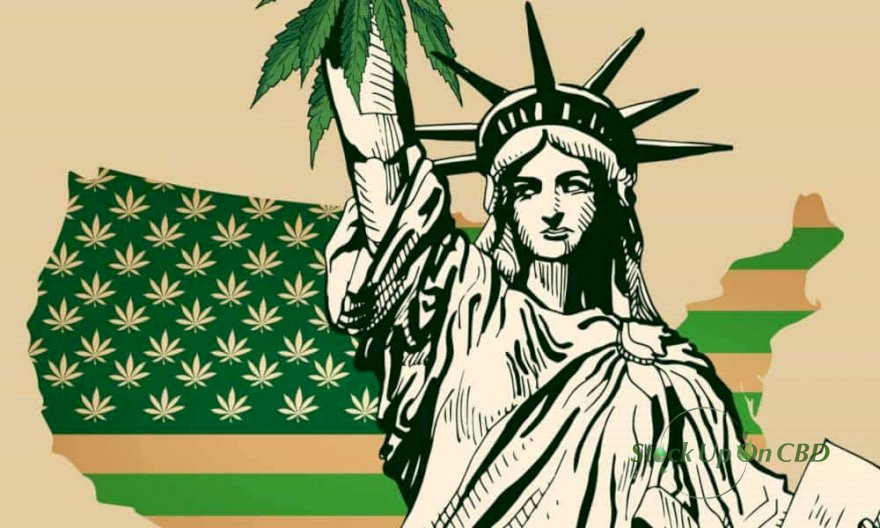 If you’re confused about if CBD is legal in the United States, you’re not alone. America’s laws on marijuana, hemp, and CBD are some of the most contradictory and difficult to understand in the world.

People can’t get high from CBD, but they can still reap a variety of health benefits from it.

So is CBD legal in all 50 states? Well, yes and no. Continue reading, and we’ll walk you through everything you need to know about CBD’s legality in the United States.

What the U.S. Government Says About CBD

According to the federal government, there are two types of Cannabis sativa plants: marijuana and hemp.

Although the hemp plant can’t get a person high, it looks identical to the marijuana plant. Because it can be difficult to tell the difference between a hemp and marijuana flower, both plants have essentially been illegal to possess for decades.

However, in 2018, a major change happened. That year, President Donald Trump signed in to the law the Agriculture Improvement Act of 2018 (also known as the Farm Bill). This law meant that it was now legal to derive and possess CBD from a hemp flower as long as it contained 0.3% THC or less.

This law applied to all states.

Possessing CBD derived from a marijuana plant is still illegal.

What the States Say About CBD

So far, this all might sound fairly simple. But drug laws in America are hardly ever so straightforward.

Even though CBD derived from a hemp plant is federally legal, it is still illegal to possess CBD in many states and cities across the country.

For example, in the state of South Dakota, it’s illegal to possess or make any form of CBD, no matter how much or how little THC it contains. Yet CBD, and even medical marijuana, are completely legal in the state of North Dakota.

The federal laws are the same, but the state laws vary considerably.

It can be even more complicated when you realize that the opposite is true with marijuana laws. The federal laws still hold marijuana to be illegal yet the majority of states have legalized the drug in one form or another.

The best way to find out if CBD oil is legal where you live is to become familiar with the local laws pertaining to cannabis. These laws are changing fairly often, so it’s best to keep up with your state’s agriculture department or criminal code.

How to Find Approved CBD Products

As the federal and state laws on hemp and CBD continue to be worked out, you can cover your bases by purchasing CBD products that carry the lowest legal risk. To do this, it’s important that you check the websites of the products’ manufacturers and read all the product labels.

Here’s what you should be looking out for:

Origin of the Product

You should purchase hemp that grown in this country. When you purchase hemp from other nations, you put yourself at risk of violating America’s laws on the product’s purity.

You’re also now at the mercy of that other country’s rules and regulations for production.

Also known as a COA, a certificate of analysis is a document that shows the results from independent lab testing. These tests check for things like contaminants and potency.

The number on the product’s packaging or label should match the batch number on the COA. Some states have made it fairly easy to decipher this information.

For example, all CBD products in Indiana come with a QR code that can take customers directly to a product’s COA page.

When you’re reading the certificate of analysis, you need to make sure that the lab which is performing the tests is meeting the “ISO 17025” standards. This is an international standard for lab testing and calibration.

The testing methods should have also been validated by one of the following national regulatory organizations: the U.S. Pharmacopeia, the American Herbal Pharmacopoeia, or the Association of Official Agricultural Chemists.

The certificate of analysis should also confirm that the product contains the amount of THC and CBD that the packaging claims it contains. This should be for the total product and for each dose as well.

General CBD Laws in All 50 States

As we said, the laws on CBD vary widely across the country. However, there are three facts with regard to CBD’s legality that applies to all 50 states:

Even in the strictest states, CBD is still at least legal in the form of Epidiolex. So in that limited sense, we can say that CBD is legal in every state.

Is CBD Legal in America?

Hopefully, after reading the above, you now have an answer to the question, “Is CBD legal in all 50 states?”.

Despite what the science and research does or doesn’t say with regard to the effectiveness of CBD, it’s important that if you want to possess the drug, that you stay up to date with your jurisdictions drug laws.

A Guide to Buying CBD Products