Is Hemp Sativa Or Indica? 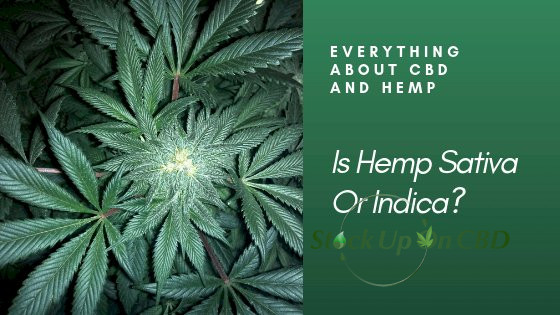 Is Hemp Sativa Or Indica?

One of the first lessons when learning about cannabis is the difference between the strains indica and sativa. Knowing the effects of each can have a serious and beneficial impact on your health. Each strain improves a number of different conditions. You might be surprised where hemp fits in.

With today’s technology, it has been possible to create hybrid strains of both indica and sativa plants. These hybrid variations are powerful tools that personalize cannabis treatments.

One of the oldest known plants on earth is cannabis. It has been used for food, fiber, and medicine throughout history and is currently one of the most studied plants in existence. Hemp is a type of cannabis, so the discussion applies to CBD users.

In fact, hemp is actually the purest form of cannabis sativa.

The 18th century brought about the discovery and introduction of the indica and sativa species. During the colonization of India, Jean-Baptiste Lamarck laid claim to the distinction of the shorter and denser indica plants that grow in the more tropical regions. Also during that time, Carl Linneaus gave the name of sativa to the taller plant, with the narrow leaves, found in the more temperate climates of Europe.

The most notable contrast is that the indica plant generally contains more of the cannabinoids tetrahydrocannabinol (THC), the intoxicating compound in cannabis. Cannabidiol (CBD), the element that has been found to have the most effect on health issues, is more often found to have higher concentrates in sativa.

Some of the effects that the indica plants have on these conditions is that is increases appetite to help cancer patients, reduces inflammation to provide some relief for fibromyalgia sufferers, and muscle relaxation to assist with the impact of seizures.

Many say that the sativa strains of cannabis have effects that promote creativity and are more uplifting than their indica sisters. Often times, sativa plants are can be attributed to the more cerebral intoxicating feeling than the overall body effects of indica plants. Because of that some of the conditions that sativa strains can help are…

One of the most important effects of the sativa plant is that it produces a feeling of happiness and can stabilize mood swings. Furthermore, Cannabis sativa increases concentration and energy, while also promoting focus. One of the most profound effects, that is important in helping all conditions, is that sativa strains relieve stress.

Instead of the usual either/or, hybrids offer a pleasant marriage of both. With the many years of cross-breeding, it is hard to distinguish the strain just from looks. If a hybrid happens to be heavier in indica or sativa, it may show some of the corresponding characteristics.

One of the most beneficial factors of hybrid cannabis plants is that it allows people the ability to tailor their pain management. Medicinal hybrid strains target multiple symptoms.

There is so much to know when it comes to medical cannabis. Becoming educated on the basics will help set a good foundation. Researchers are learning new information all the time, be sure to check back for the most current news.

5 CBD Oil Myths That Need to Be Busted Right Now